Get a demo
Want some engaging, fun virtual event ideas? We compiled a list for you! 📝

[Webinar] Impacting Individuals at All Stages of the Employee Lifecycle! 🔄 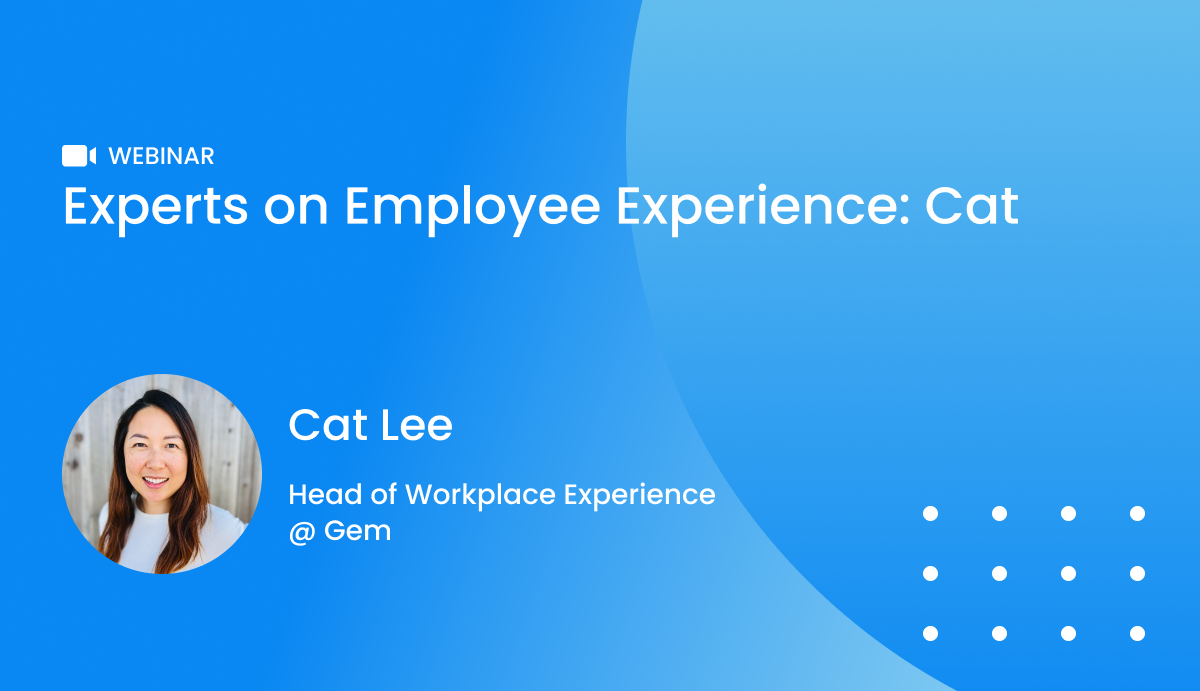 We are back with our June Webinar Series! – Experts on Employee Experience! 🎉 It is a monthly webinar series where Jade Choy, Epoch's CEO, has conversations with leaders and innovators in the employee experience and engagement space.

In case you missed it, here are some key learnings and takeaways from our June Webinar featuring Cat Lee, who is Head of Workplace Experience at Gem! Scroll on for notes! 👇

Cat Lee is very passionate about employee experience and she started career as a Vibe Manager at Heroku. She is currently the Head of Workplace Experience at Gem! Gem is a recruiting platform that enables talent acquisition teams to find and engage top talent.

Cat is focused on learning, curating and growing the employee journey. ✨ In this Webinar, you will get insight into bringing your passion into your work, advocating for your employees, and impacting individuals at all stages of the employee lifecycle!

Fun fact: At one point in Cat's career, she worked at a small skincare startup! But then realized her passion for employee experience and tech companies!

Cat is based in theSan Francisco Bay Area and uses she/her pronouns.💙

Why are you so interested in employee experience? What is the motivation behind it?

Cat believes that given the way the industry is going, especially in tech and how they're humanizing, the experience of being an employee is really interesting. She has always loved being a part of that journey for employees. Cat wishes to capitalize on that and make sure that employees are feeling like humans when they are at work, because they are so much more than just a number.

A lot of employee experience has to do with programs and events. And one thing we spoke about was your perspective on why, the internal program is more interesting to you than the external?

Cat expresses how she can relate to the employee experience. “I am the employee. So it's easier for me to put myself in those shoes constantly every time, I always say I'm like the advocate for the employee”

And it’s easy for her to often step into those shoes and ask:

As we dive into employee experience/workplace experience, how would you define it?

What programs and events have you done in the past that you're super proud of?

Cat believes that the biggest thing she’s learned in her career is to take risks constantly and to feel passionate about something. Specifically, at Heroku, Cat believed that there were many benefits to putting together an employee conference, and was given the opportunity to plan one. She sent out emails that asked if anyone wanted to be a part of the planning team, and it started from there.

It eventually became an annual event that they hosted and got larger each time. Towards the end, they were renting out hotels in the city and it even became a week-long event. To Cat, that was a huge source of pride and where she also believes she gained confidence, as someone gave her leadership and trusted her.

There was another event that Cat hosted which was a family inclusive, summer festival. There was a group of three people planning this event for over 300 people. There were different tracks like a speaker track, a maker track and a kid's track. There was event a Boba and chocolate tasting! At the end they had a musical act, as they had an employee who was a musician.

Did you have an intention behind that event?

In planning the summer festival, Cat had to work with a very blurry objective. She had to come up with an idea on how to make this event enjoyable and something that will make employees excited to join. She found that the summer event was less about connection, as it is difficult with over 300 attendees. As this event was planned during the earlier stages of the pandemic, she decided to make her vision for the event centered around bringing people together and showing that a virtual gathering can be dynamic.

Cat found that people love to be entertained, create things together and learn new things. Anything that involved employees’ friends or families were also incredibly successful, as employees who love their companies are proud and want to share that with the people in their lives. The employees became excited and wanted to show their company off because their kids, partner or roommate were excited.

Anything with animals will also be extremely successful - Cat found that people love animals.

I’m sure you had smaller events where the intention was to connect employees. How do you think about that or what were some programs you were excited to explore?

Cat found that fostering connection is easier with a smaller group. At Chime, they ran a series called Chime Connections, which was inspired by the fact that people like to do things together. They found that this was an easy way to get people to talk to each other. Cat hosted four different sessions. First there was Chime Cooks, which eventually led to Chime Tastes, as not everyone likes to cook, but everyone likes to eat! Then there was Chime Makes, however, as the event participation skewed towards more women than men, they decided to create Chime Builds to capture the interest of a wider group.

During their first summer event, they had a super popular lego class, which broke the company intranet! As this became a regular series, Cat essentially had to bottleneck the event to 50-100 people per session, run two sessions per month, and limit employees to only taking one class per quarter. These classes created a buzz where people really wanted to be involved with the event. As Lego proved itself to be a difficult company to work with, Cat made the pivot to a premade kit, which would be sent out to everyone. The introduction of a Lego-master gave the event even more popularity, as the Lego-master’s immense library of Lego-related knowledge gave the events great accessibility for members in the room. Play-Well TEKnologies was a vendor that Cat used as they have instructors that will lead classes that are kid-friendly.

More generally, Cat found that it is incredibly powerful to make room for a breakout in every session; this helps employees better connect with each other in a less cluttered environment. Using simple games like Bingo to give employees a break from work and a chance to connect with others are super popular. Furthermore, she found that typical events need to be very scripted and scheduled in order to better engage and connect with the audience.

In terms of your thinking on hybrid work, what works and what doesn’t, especially when you are starting out at Gem with no blueprint?

Prior to the pandemic, Cat noticed that Heroku (where she used to work) had an office centric culture. As the pandemic went on, it became clear that companies can be both productive and profitable with a distributed employee base. As hybrid work was uncharted territory, Cat wanted to define this for Gem.

By considering the benefits and drawbacks of both in-person and remote work at Gem, Cat was able to work with managers to set expectations for what hybrid work could look like. She felt that in order for a hybrid model to be successful, there must be a remote first culture to accommodate distributed workers.

One of the most important things Cat noticed was that it is imperative to be transparent and explicit in a hybrid environment; she feels that when you tend to be more explicit, employees will trust you more. Employees will feel they can say more when their managers have told them all that they can.

Something else Cat has considered while developing Gem’s hybrid culture has been proximity bias, where leaders tended to recognize the people directly in front of them. Given that work is company wide and not tied to a specific workplace, proximity bias is something everyone needs to work on combatting. This is lived by the workplace leaders: if a company claims they are a remote first culture, yet the co-founders are coming into office everyday - what does this say? Having a remote first culture is something that needs to bleed throughout the entire company; a lot of cross functional work must be done for this to happen.

At in-person locations, most offices will have an office manager. Cat feels that remote employees represent their own office, and also need their own managers. This is important because remote employees need an advocate: someone to advise onsite people on how to best create equitable hybrid experiences. While the hybrid experience will never be equal, it is important to aim for equity in order to provide the best possible experience for all workers.

How do you get managers aligned when it comes to change management?

She finds that change is often cyclical. Companies first start small and are often just “getting it done”. There then comes a point where it’s no longer sustainable and so processes must be reviewed. Companies hit 250-300 employees, where they mature and have to create new processes. Again at 500, 700, 1000, and 2000 employees - processes don’t typically scale, so it is a constant cycle of reviewing and adapting.

She advises emphasizing the intention behind the change, as the best way is to bring managers along and have them understand why the change is positive and thus buy into it. The biggest key is to communicate. It’s especially important to communicate to those who particularly liked the previous management, so that they will understand why it is necessary to make these new changes. Cat suggests giving people a voice and working with them, asking questions such as:

How do people deal with time zones for remote events?

Cat acknowledges that time zones are ridiculously hard, even for events that span only one country such as NY to Hawaii! She believes in being as explicit and transparent as possible. If you’re only a 1-person show, there’s only so much you can do - so communicate that to your team.

Cat suggests having smaller groups in multiple sessions, if possible. If your calendar permits, host one session earlier in the day and one later in the day to accommodate different time zones.

What is your approach to onboarding?

Since onboarding is the first touchpoint for an employee to get an understanding of the company, Cat is a super-believer in showing personality upfront, as much as possible! Onboarding should be a super clean process, and done with intention to make it a seamless and meaningful experience.

The first few days can be overwhelming for new employees - even just setting up work equipment can be a lot to handle! It’s important to be mindful during this process and avoid hand-holding. Instead, teach your new team members how to fish so they can do it themselves later on - is that how the idiom goes? 😃

Cat loves community-building and talking to new people. She is always open to sharing ideas about employee experiences and believes that it’s important to learn from one another. Feel free to connect with her to chat!

Stay up to date with our monthly news on keeping your employees engaged and connected.

Thank you! You're subscribed to our newsletter.
Something went wrong. Try again later.

👉 Check out our full list of workplace culture and holiday events for 2022 here! 👈